Dr. Jude Ortiz of NORDIK Institute joins the International Advisory Board for a new project on cultural and creative industries in non-urban areas of the EU

Longstanding researcher with the NORDIK Institute, Dr. Jude Ortiz, has joined the International Advisory Board for a new major project exploring cultural and creative industries in Europe. The project “IN SITU – Place-based innovation of cultural and creative industries in non-urban areas” was launched on July 1, 2022, with a 48-month duration. Coordinated by the Centre for Social Studies at the University of Coimbra, Portugal, the €4 million project is funded by the European Commission under the Horizon Europe programme.

Despite the increased visibility and importance of cultural and creative industries (CCIs) based in non-urban areas of the European Union in the last decade, there is a noticeable lack of research and policy attention to their specific needs, characteristics, and potential. IN SITU brings together leading research approaches to economic evolution and diversification, processes of innovation, non-urban place-based planning, and entrepreneurship in CCIs. The project aims to contribute to increasing the capacity of CCIs to act as drivers of innovation, competitiveness, and sustainability in their local context.

IN SITU seeks to provide in-depth knowledge on the effects of cross-sectoral connections, innovative strategies and systems, and the needs of CCIs’ practitioners in non-urban areas, complementing this with proposals for cultural and innovation policies and frameworks. IN SITU includes also capacity-building programme to enable CCIs to address some of the key issues in their communities/regions.

The core defining aspect of IN SITU is the interlinking of research and practice through place-based IN SITU Labs – hubs for networking, capacity building, and monitoring case studies in six non-urban regions across Europe, located in Portugal, Ireland, Iceland, Finland, Latvia, and Croatia.

Registration is now open for the upcoming Children of Shingwauk Alumni Association Gathering “Remembering, Renewal and Moving Forward in 2022”.  This year’s event is in-person, following all COVID-19 protocols.

There will be: Survivor, Family and Friends Talking Circles

Everyone who is interested is invited to attend. Register here: http://www.csaa.live/register 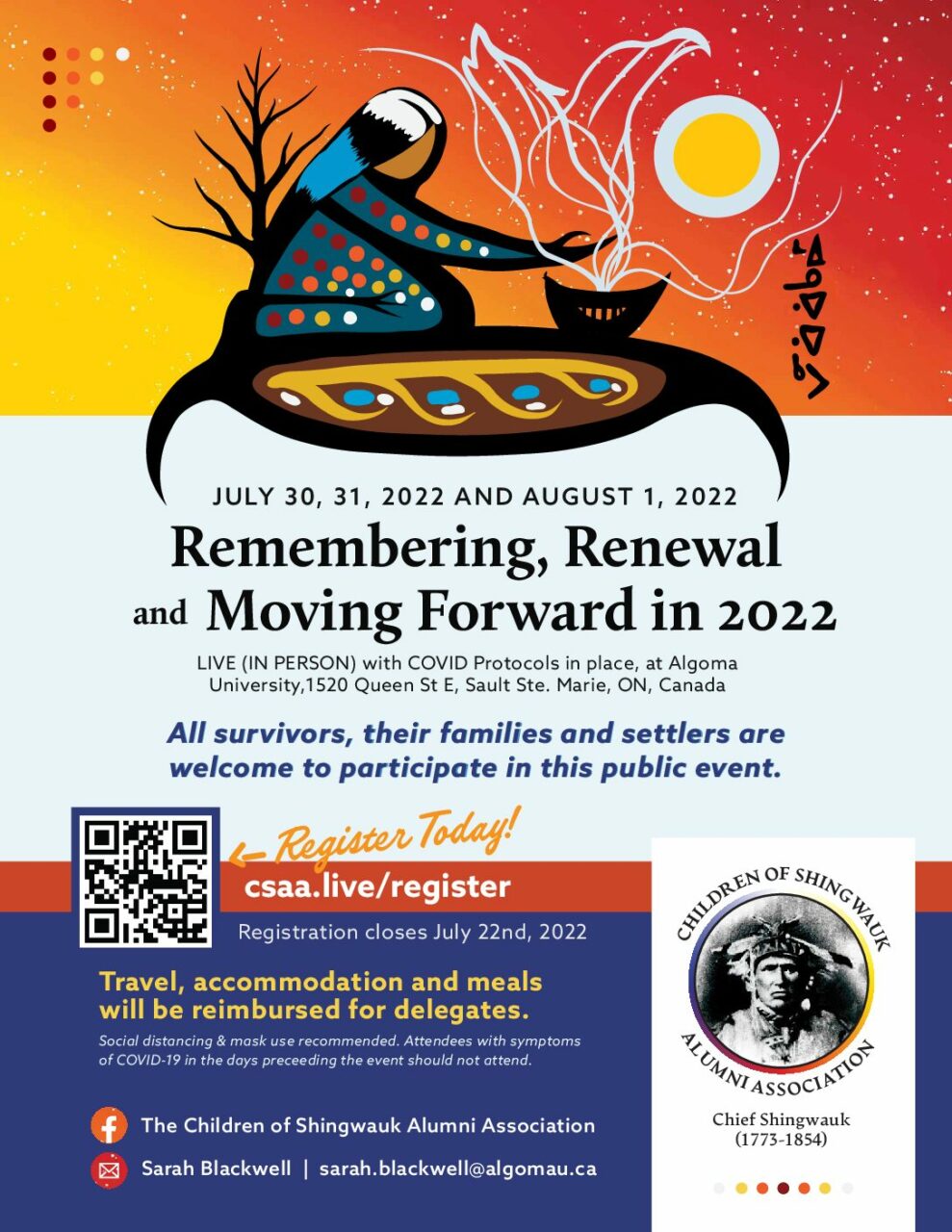 The July instalment of NORDIK Institute’s Spark Series will feature Dr. Rose Ann Torres, from Algoma University’s School of Social Work. The presentation will take place via Zoom on Wednesday, July 27th at 12 p.m. Click the link at the bottom of this page to register. 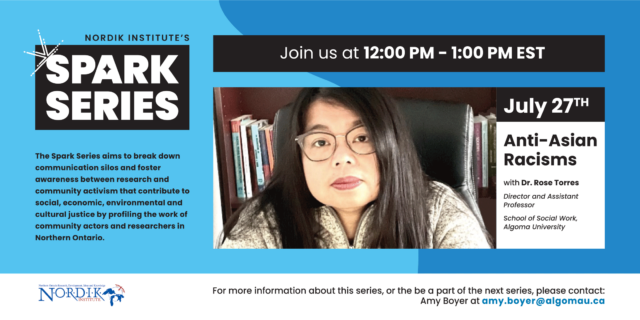 In Dr. Torres’ presentation, she argues that white supremacy is fundamental to the formation of the Canadian nation and the rise of the post-war welfare state. In other words, does the category of “Asians” even exist when Asians are considered the disordered other? This presentation looks outside the shaping of whiteness and to start asking ethical question of how Asians may look within and without communities in the diaspora. To do this, this presentation discusses and deliberates the history of anti-Asian racism. Including Dr. Torres’ initial research findings on the experience of Filipino health care workers in Northern Ontario during the COVID-19 pandemic and the different ways in which we can re-imagine Asians from a place of disorder.

Dr. Rose Ann Torres is the Director and Assistant Professor in the School of Social Work at Algoma University. She is currently a Visiting Professor at the Polytechnic University of the Philippines. Prior to joining Algoma University, she was an Assistant Professor at University of New Brunswick. Dr. Torres is currently the principal investigator of “Examining Access to Mental Health Care Service: The Impact of Covid-19 on Filipino Health Care Workers in Northern Ontario” and a co- principal investigator (with Dr. Nyaga) for a SSHRC funded project entitled: “Effects of COVID-19 on Teaching, and Learning: Stories of Indigenous and Racialized Faculty Members and Students at Algoma University. She co-edited two books on “Asian Canada is Burning: Theories, Methods, Pedagogies, and Praxes” with Fernwood Publishing (Forthcoming) and “Critical Reflexive Research Methodologies with University of Calgary Press” (Forthcoming).

The Spark Series aims to break down communication silos and foster awareness between research and community activism that contribute to social, economic, environmental and cultural justice by profiling the work of community actors and researchers in Northern Ontario.

Register for this event here: https://www.eventbrite.ca/e/nordik-spark-series-anti-asian-racisms-with-dr-rose-ann-torres-tickets-379211912037