Members of the Algoma Community Travel to Colombia for Presidential Inauguration

In a follow-up to the June visit of Indigenous and Afro-Colombian leaders to Ottawa and Northern Ontario, including a visit to Algoma University and Shingwauk Kinomaage Gamig, a delegation of Indigenous and Afro-Canadian leaders as well as allied counterparts and victims of the Colombian armed conflict exiled to Canada, was invited to the inauguration of President  Gustavo Petro and Vice President Francia Marquez in Bogotá. The inauguration took place on August 7, 2022 and the Canadian delegation was invited on behalf of the Vice President, Francia Marquez.

While in Bogota, the delegation participated in a gathering at the residence of the Canadian Ambassador Marianick Tremblay, together with the visiting Parliamentary Secretary to the Minister of Foreign Affairs Maninder Sidhu, members of the Ethnic Commission for Peace and Defense of Territorial Rights. Delegates also met with Indigenous and Afro-Colombian members of the incoming government, including the new Ambassador to the United Nations, Leonor Salabata, a recognized Indigenous leader from the Arhuaca Nation. The delegation also participated in activities related to historical reparations for Black and Indigenous peoples as well as a meeting directed at building international solidarity hosted by both The Global Network – Ethnic People’s and Peace and The Black Alliance for Peace. Meetings centred  on how Black and Indigenous peoples  globally can work to strengthen direct governance and economic relationships among peoples, address critical issues such as poverty, land rights and climate change, and broaden spaces for dialogue and action in order to support efforts of the incoming government. The inauguration itself was an incredible testament to the power of social movements in the country who mobilized in an intensive effort to elect the Petro-Marquez formula, in a historic shift from an elitist government and policies that left rural, Indigenous and Afro-Colombian communities and territories in conditions of ongoing poverty and marginalization, displacement and violence directed against them. Today there is real hope for change.

Chief Sayers had this to say upon reflection of his experience “I’m looking forward to continuing to work at this level on a Nation-to-Nation basis. This international exposure can only enhance the work that we’re doing on our lands here in proximity to Lake Superior with the Canadian and Ontario governments.”

“This visit meant for me the meeting of my two worlds”, began Elizabeth when thinking of what the delegation to Colombia meant for her. “There is certainty that there are no borders for solidarity and alliance building between peoples” (quote translated to English).

Professor Sheila Gruner emphasized the many parallels between Indigneous and Afrodiasporic thought and ways of being across the Americas, including the emphasis on “living well” with the Earth, within and across societies, reflected in a concept that the incoming Vice President articulated in her campaign as “vivir sabroso” (living well and enjoying life- until “dignity becomes the norm”) and “Ubuntu” (I am because we are). “There is a beautiful opportunity here related to reorienting the  relationship between Canada and Colombia to emphasize what Algoma University has committed to, in way of decolonization, indigenization and diversity.”

Based on ongoing efforts to generate spaces for effective exchange between and among Indigenous, Afrodescendant and allied faculty and other counterparts, there will be an emphasis on higher education for communities historically marginalized and establishing routes to constructing a “complete peace” in Colombia. Algoma University, Shingwauk Kinomaage Gamig, NORDIK Institute and the new Faculty of Cross Cultural Studies have been invited to continue building in these areas.

For more information on the delegation or the work being done by those associated with the delegation, please contact/visit the following people/websites below: 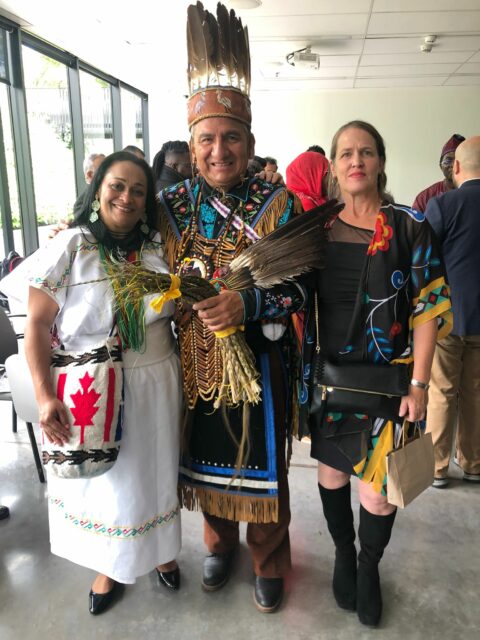